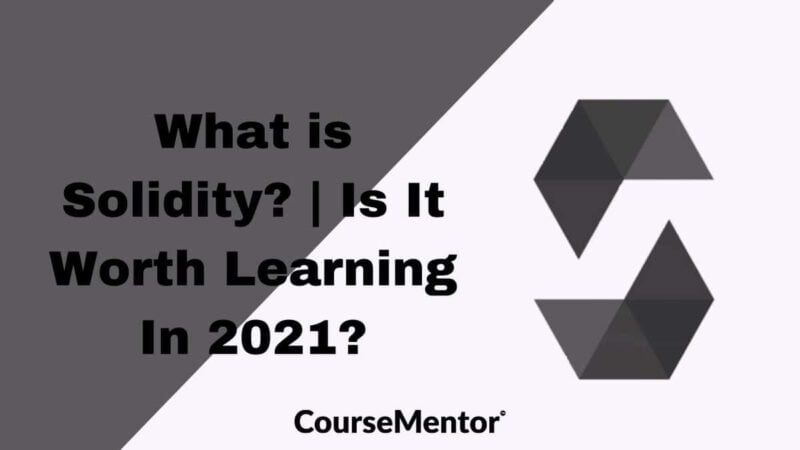 Have you ever imagined how crowdfunding, multi-signature wallets, etc. are possible? Well, this is possible with the help of solidity! Solidity is the statically typed, complex user-defined programming language that supports libraries and inheritance.

With the help of solidity, users can develop contracts for voting, blind auctions, crowdfunding, and multi-signature wallets. Want to know more about solidity? Let’s check all the useful information below.

Moreover, I have discussed whether it is worth learning the solidity in 2021 or not. Check the answer to this in the below section.

It is a high-level contract-oriented language for building smart contracts. It was inspired by Python, C++, and JavaScript and was developed to target the EVM (Ethereum Virtual Machine).

It was created by Alex Beregszaszi, Christian Reitwiessner, and many former core contributors of Ethereum to allow smart contract writing on blockchain platforms like Ethereum.

It is a decentralized or blockchain-based network that operates smart contracts or applications.

All these run as scheduled with no chance of failure, manipulation, fraud, or third-party intervention.

The smart contract is a computer protocol for digitally verifying, facilitating, or enforcing contract results and negotiation. Smart contracts allow for the execution of trustworthy transactions without the involvement of a third party.

Nick Szabo introduced the idea of smart contracts for the first time in 1994. Szabo is a legal theorist and cryptographer credited for starting the foundation for digital currency.

A Solidity contract is a set of data (its state) and code (its functions) that lives on the Ethereum blockchain at a specific address.

It is the Ethereum runtime environment for smart contracts. The EVM focuses on providing protection and allowing computers worldwide to execute untrusted code.

The Ethereum Virtual Machine specializes in avoiding Denial-of-Service attacks and ascertains that programs do not have access to each other’s state, allowing communication to occur without any interruption.

The Ethereum Virtual Machine was created to serve as a runtime framework for Ethereum-based smart contracts.

What is the basic syntax of solidity?

private — only this contract

internal-only this contract and contracts deriving from it

view –- not possible to change the state

payable — to get ether

pure –- not available for reading from or change the state

How to write the basic program of solidity?

Like other programming languages like Python and JavaScript, solidity also has the basic program as Hello World. This can be coded as:

Is solidity worth learning in 2021?

Well, as per the Google trends, solidity has got the popularity in the last 5 years. In 2019-2020, there is a drop in its popularity. But overall, it keeps on growing.

Because of the popularity, there is always a demand for solidity-skilled people. Moreover, this field also provides a handsome salary package.

Now, let’s find the reason why it is beneficial to learn solidity besides salary and job opportunities.

Recently, Tesla announced that they would be going to accept Bitcoin as the payment and would not convert it into USD or stable coin. This is great for cryptos.

And if things work properly, there would be a time when developers are required to understand how to develop apps, which can easily integrate with the blockchains.

In my opinion, you should start to learn solidity. This is one of the programming languages used to develop apps that can take advantage of Ethereum. So, it is quite worth learning solidity in 2021.

Solidity is going to be a new trend in the upcoming years. Moreover, it will play an important role in creating apps that easily benefit Ethereum. That is why it is always worth learning.

Above are the important terms that are used in solidity. Try to learn all these terms for a better understanding. If you have any issues with solidity, let me know through your comments.

What language is solidity?

Solidity is a high-level language, the contract-oriented language used for performing smart contracts. It was inspired by Python, C++, and JavaScript.

Which solidity version should I use?

If you are deploying contracts, then it is better to use the latest released solidity version. The reason for this, the latest version has new features, bug fixing features, and more.