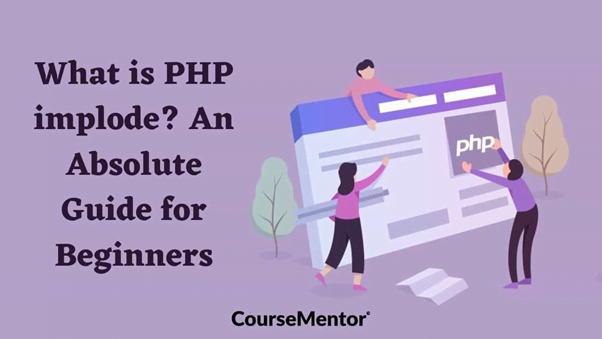 Want to add the array of element(s) to form a single string? Yes, you might be!! Well, being a PHP user, this would be the basic requirement of your program.

So? How to do this. This is possible using the predefined built-in function of PHP called PHP implode, or just the implode().

Now, you might be a beginner who does not have enough knowledge about implode(). Don’t worry!! I have listed all the necessary details along with useful examples for a better understanding.

So, without confusing you more. Let’s start with the overview of PHP implode().

What is PHP implode?

In other words, the Implode () function in PHP helps in the formation of strings with the help of elements of the array. It is also known as “Array to a String.”

What is the useful syntax of PHP Implode?

Syntax helps in governing the structure of the sentences in a scripting language. It works on the set of processes, principles, and rules in the governing process. It also manages to look over the arrangement of words in the script.

There are a total of two syntaxes used in the implode () function in PHP.

There are two parameters that help in getting the input of the function. One is considered to be mandatory, while the other one is optional.

Array: This parameter is considered mandatory because its values as components help to join in order to build a string.

Separator: This parameter is considered optional because it comprises an empty string. The values of an array that combines to form a string are separated with the help of a separator parameter.

An example of joining elements of the array with a string:

An example of separating with different characters to array elements:

Hello! What are you doing?

An example of an object that can be determined by using the toString() function:

What is the difference between explode and implode in PHP?

The explode() function of PHP enables the user to separate or break a string in the smaller section or text. And each break would be at the same symbol. The symbols used for exploding are called delimiters. Or, in simple words, the explode() function is useful for breaking the string into an array.

On the other hand, the PHP implode function can return the string from the array’s element.

This blog will surely help you to understand the core concept of the PHP implode () function. This is the most popular scripting language extensively used by many programmers.

The syntax used in the blog will be helpful in understanding the function much easier. The definition of PHP is also mentioned in order to get a clear picture of the topic.

If you want to get more examples or if you have any doubt regarding the PHP implode, let me know. I will try my best to clear your doubt.

“Stay in touch with COURSEMENTOR to enhance your programming knowledge.”

What are the uses of explode () and implode () function?

Why implode is used in PHP?

Using the implode() function in PHP, the user can combine the array elements with the string. That is why it is remembered as “array to string.”