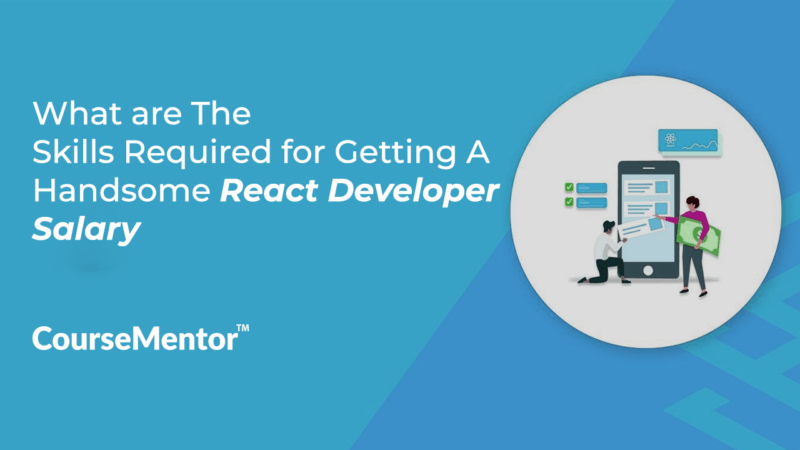 JavaScript is a very vague language that is used in many devices. Desktop, mobile apps, and Web all use JavaScript for their work. And with all this, there must be an expert to keep an eye on the applications’ proper functioning. They must mostly work at the front end of the company that deals with client’s issues directly.

Many of the new generation students are willing to pursue their degrees in the field of computer science. And they want to become the tech guy, who is a master in managing the JavaScript problem with ease.

They get a huge salary package which is the best part to become a React Developers. They are high in demand in every company they work for. Because dealing with languages in JavaScript is a hard nutshell to crack. Their salary varies with the position they hold in the company. There are top 3 positions: Front End Developer, Back End Developer, and Full Stack Developer. Let’s explore react developer salary:-

Why to become a React Developer?

It is time for a React Developer to showcase its skills in today’s market. Technology is booming at a very high pace. To meet the pace, companies are paying huge packages to React Developer to hire them. There are diverse roles that a React Developer in the company can do. They have to deal with the Full Stack Developer, Web Developer, and UI engineer that will be the most priority of many companies. With years of experience, the react developer salary also increase.

In today’s time, we all depend on the apps we use on our mobiles phone. All the work of a company is being monitored with the help of mails. The application which we use daily is messenger, Gmail, Facebook, and much more. So, to check the proper working of every app. There is this guy who is in high demand for the company. They are paid a good amount to tackle all the issues in the application.

They are working on the front end to get the client’s problems to ease. With a quick increase in the count of apps, the demand for React Developer also increases.

Responsible for improving the product portfolio

The skilled enough man in React Developer will help the company improve its UX and UI functionality. To raise the growth of popularity in the market. It can only be possible if the React Developer understands the core knowledge of design and technical aspects.

The main focus of every company is to increase as much traffic possible on its application. To do so, A good React Developer will make such changes in the Fonts, Images, and Colours. That will change the user experience in using the application. It can only be possible with the help of an outstanding React Developer. This reason will help the React Developer to enhance their skills in creativity and testing the best out of him or her. The main motto is to keep the customer engaged in the application if possible.

A React Developer should have the ability to grasp all the required skills and knowledge rapidly. They should be ready to learn the basics well and make them as strong as possible. They must mostly work at the front end of the company. Let’s look at some of the hard skills that will lead to a good react developer salary.

The candidate should have great skills in the field of JavaScript. As the main work of the React Developer is to play with the JavaScript fundamentals and UI engineers. With the core knowledge about JavaScript Fundamentals, the candidate should also be aware of the ES6 skills given below. You should know about it very well to get decent amount of react developer salary.

Array Method: JavaScript gives you ample tools that can store and access the data much easier and faster. These tools are as follows; Filter, Reduce, and Map. These tools are used extensively in the array method.

Variable and Scoping: it is not always necessary to use the var function all the time. When it comes to storing variables, with the help of ES6, the Developer can choose keywords like ‘const.’ and ‘let’.

It is the most important skill that a React Developer must possess. Without knowledge of HTML/CSS, the Developer is of no use. This skill helps to engage the customer on the application for a long period. This function makes the application interface look captivating that appeals to users. A good React Developer should possess core knowledge in the arena of HTML and CSS. Semantic HTML tags and CSS selector is a must knowledge to dive into the pool of developers. You should be well aware of this to get beginners level react developer salary.

This the other alternative for HTML. Most React Developers focus more on JSX rather than on HTML. JSX is an extension in the world of React JavaScript. The term JSX means it’s an abstraction layer which is known as React.createElement() API. With the help of this API, a developer can create a marvelous application.

A good React Developer must have experience in using the Git toolkit. It helps in the elasticity to update the developments on multiple coding. All projects use the tools like Gitlab, GitHub, and BitBucket to initiate the update. It uses the commands like pull, push, comment, add, and much more in the ReactJS development. It also helps to use some tactics such as branching, merging, handling, and much more.

This skill is a must for every React Developer; it allows the Developer to maintain and manage the React library. Previously, when Redux was not introduced in React JavaScript. It was a pain in the head to deal with the asynchronous nature of React updates. It works on the principle of functional programming and immutability. Redux is a kind of skill that every Developer should have mastery of it. You should be aware of this tool to get best react developer salary.

This skill is helpful enough to work at the company’s front end that directly deals with the client’s needs. There should be some small software packages in the React library. The NPM (Node Package Manager) allows to download and install small software packages with the NPM registry’s help for the Developer. It is considered to be a dependency cloud storage. It is an essential skill required in React JavaScript for building a software application.

React Developer Salary based on the position

The main work of a frontend developer is to make sure that the application’s user interface should be managed perfectly. The Developer should have a creative mind in developing attractive visual that creates traffic on the website. They must look after multiple devices like desktop, mobile phone, and webpage. The Developer should have core knowledge in UX, UI, HTML, and JavaScript.

The React Developer salary for this field is around Rs 500,000. Depending on the company.

A backend developer’s main work is to make sure that the software’s working is smooth and efficient. They are responsible for the task performance in the software. The Developer uses vague array services like databases, email systems, data storage systems, logging systems, caching systems, and much more. They are the specialist in developing great functional logic and design.

The React Developer salary for this field is around Rs 700,000. Depending on the company.

They are the kind of Developer that takes responsibility for both sides. I.e., frontend developers and backend developers. They must look from the working of User Interface to the database and server and coding. They must manage the working of an application from the development till the final result. Full stack developers are responsible for having a good communication skill and designing technique that helps develop an application.

The React Developer salary for this field is around Rs 600,000. Depending on the company.

This blog will surely help you to know the knowledge about the React Developer salary. The article also consists of multiple reasons to become a React Developer. All the essential skills have been mentioned in the article above to prepare for entering the technical world. It has got a lot of benefits from position to the salary. In the end, you can find the React Developer Salary range with their position.