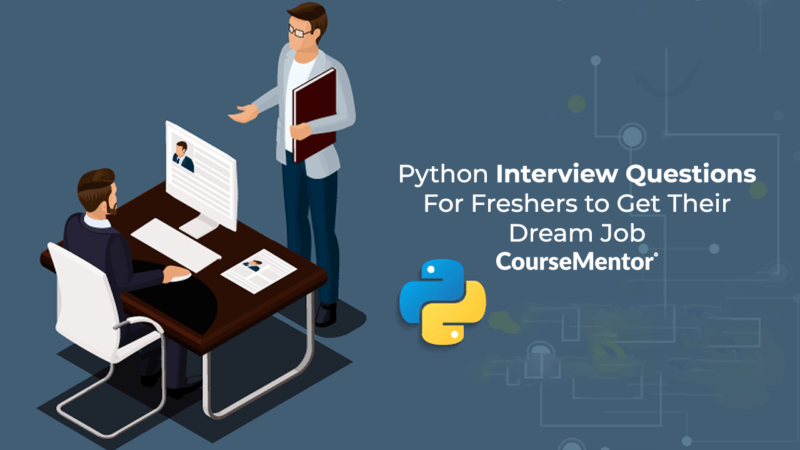 Python interview questions are most searched Everything we look around these days is all mostly programmed by the computers. The computer is getting taught to read human behavior, and minds. To deliver the best outcome according to the individual needs. Computers are the basis for every problem that is being faced by a human.

The technology is running so ahead that with just a click of a button one can see what their kids are doing in the house and with the same click they can access any functions of the house, all this is possible with such high-level programming language and one of them is Python language.

Today I will talk about the python language and will make sure that this article will help you to crack the most frequently asked python interview questions with an ace.

Python language can be easily dashed through many different platforms like Linux, Macintosh, UNIX, and Windows, the reason why it can run through all is that it’s an object-oriented language with a high but easy level of the coding program.

Let’s have a look at some of the most frequently asked python interview questions below.

Always prepare for answering the most basic question in an interview which is directly related to the field that is “what”. This question lets the interviewer know that you are aware of what all this interview is about!

Basically, a python programming language helps to summarise a complex code into a very basic one that is very simple to understand and read.

What is the basic difference between Java and Python?

When it comes to the application use of Data Science and Machine learning, Python is just Brilliant, compared to Java which is just average. The coding speed in the Python programming language is just Perfect, while on the other hand, Java is just an Average.

What are the applications of Python?

Many of the software domains use python applications to enhance their performance and efficiency in the programming world. There are many applications in python which are used in several sectors of internet development.

What is the difference between Deep copy and Shallow copy?

The function of Deep copy is to store values data, which is already imitated in the language, whereas in Shallow copy a new instance type is created freshly, and it keeps the values that have been freshly copied. It is one of the frequently asked Python interview questions.

How do we achieve multithreading in python?

Python has a construct called the Global Interpreter Lock (GIL), it does a little work, then passes the GIL onto the next thread. The passing of the thread is so fast that if you are seeing it through your naked eye it might seem like the execution is done in parallel, but that is not correct, they are simply taking turns using the same CPU core. The Python Global Interpreter Lock does not allow more than one thread to hold the Python interpreter at a particular point in time.

What is pickling and unpickling?

Converting a Python object hierarchy to a byte stream is called pickling. Pickling is also referred to as serialization. While on the other hand, it’s completely the opposite; converting a byte stream to a python object hierarchy is called unpickling. Unpickling is also referred to as deserialization. It is one of the most asked Python interview questions.

If we just created a neural network model, we could now save that model to our hard drive, pickle it and then we can unpickle it to bring it back into another software program or to use it at some other time.

What personality will you bring to the team?

Again, a very basic yet easy answer which will define your personality. So, while answering this you must show that how you work, your presence of mind, your anger management, and a lot of other stuff to look after. Always say the positive in you, be supportive with the team members, and show dedication towards your work. Always assure them that you will give your best for the company. Respond to people’s queries and questions in as quick a time as possible. It is one of the frequently asked Python interview questions.

Once again, a very formal question that doesn’t always have to be given emotionally. Make a statement that clearly shows your weakness in a positive way like my weakness is that it’s too difficult to say no to people very easily. Which result in taking all others’ burden in my head. This ends up working all day just to catch up with all the expectations with the people’s task. This is a very smart move to make whenever this type of question arises.

Python has many benefits and is the most boosted programming language in recent times. many of the IT sector, as well as the industrial sectors, use Python as their base programming language because of its simplicity and ease of its usage. This blog will surely help prepare for the python interview questions for many students who are out there to conquer this technological world. Now you may be get ready to tackle all the python interview questions in your first interview.