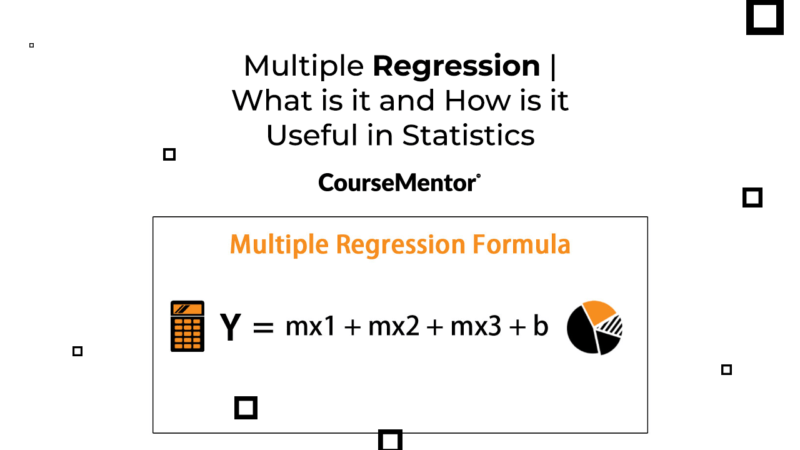 Multiple regression is one of the major aspects of statistics. It is playing a crucial role in statistics and mathematics. Here we are going to explain everything about it. let’s discuss it:-

It is mainly categorized into –

Regression, be it simple or multiple takes the form of an equation.

The general form of each type of regression is:

Y is the dependent variable, the one which is predicted.

X is the independent variable that is used to predict Y

a is the intercept

b is the slope and

u is the regression residual.

What is multiple regression?

One would be able to find two terms – Multiple linear regression (MLR) and multiple regression used quite often when talking about it. Both these terms mean the same. It is one such statistical technique that employs two or more explanatory variables (independent) in order to predict the outcome of one response variable (dependent).

When can it be used?

Having understood what exactly multiple regression is, it is now time to know when and where can it be used.

Certain assumptions back multiple regression. There are four major assumptions involved in the process. They are –

It requires that the relationship between the independent and dependent variables needs to be linear. To test this assumption of linearity, one can do so with scatterplots. Though there are many options available to check for the required linear relationship, ‘scatterplots’ and ‘partial regression plot’ are the best ways to go. Using any of these techniques, if the relationship obtained is non-linear, then one can run the non-linear regression analysis or transform the data.

This is nothing but assuming that different samples have the same variance even if they came from different populations. In other words, the error doesn’t change significantly across the values of the independent variables.

This assumption talks about the observations in the sample being independent of each other. Simply put, the measurements for one model are not influenced by or related to other sample subjects’ measurements.

The assumption of normality

This states that the data follows a normal distribution.

In addition to the above, there are few other assumptions like the absence of multicollinearity, the residuals are homoscedastic, and they are approximately rectangular-shaped, to talk about a few.

Now that everything is in place let’s look at the steps to be followed while performing multiple regression analysis.

How to carry out multiple regression on SPSS?

SPSS is the world’s leading software that works best for many statistical analysis techniques like regression analysis.

To carry out multiple regression on SPSS, the following steps have to be followed.

Some of the most common applications are –

No wonder it serves us in a variety of ways. But, multiple regression has a lot more applications than simple ones. Using the right techniques and proper data collection methods can help predict outcomes that ultimately pave the way for better decisions ahead.