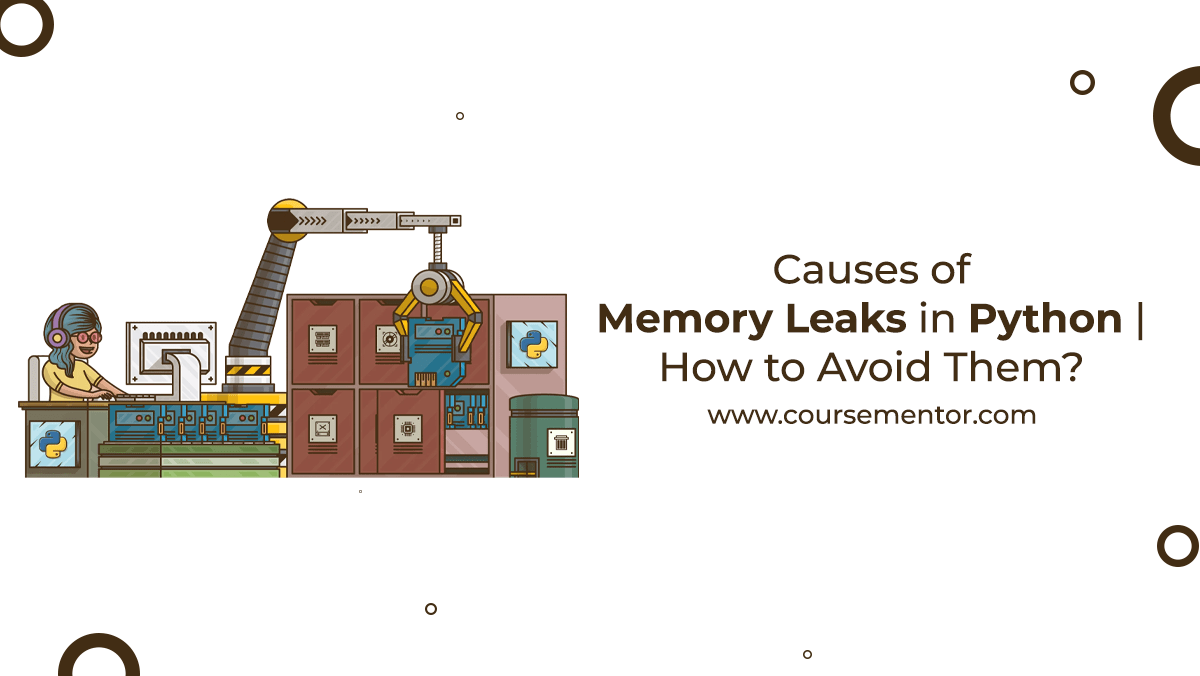 Memory leaks in Python is a critical issue. Even when writing codes for any programming language, memory is one of the most important parts. A programmer learns to interact with the memory at the lowest level. It helps in maintaining the efficient working of a program. Programmers often have to deal with problems like memory leaks. Memory leaks are terrible as they block resources of memory and degrade the performance of the applications. Programs usually run out of memory because of the unused references that were not deleted. This issue happens when the garbage collector cannot clean and remove the unreferenced data from a program.

Python language is prone to such memory leaks. Therefore, it becomes a challenge for the programmers and developers to identify and resolve the errors. Keep reading this article if you want to know more about the causes and solutions of memory leaks.

What is a memory leak?

When a programmer creates a memory in a heap and forgets to delete it, it leads to a memory leak. It is a resource leak. Due to this, the program’s available memory gets exhausted and leads to the destruction of the program. It fills up the storage of the application unnecessarily and makes the working of the program slow. Memory leaks are also outcomes of program bugs.

Like any other language, Python also has a memory. When a programmer fails to delete unused objects in the memory, the memory gets filled up. These objects leak into the used memory and cannot be removed. Underlying libraries or C extensions, lingering large objects which are not released, and reference cycles within the code can cause memory leaks. Thus we can say that memory leaks are caused when objects no longer in use are still maintained.

Memory management is an application in Python which reads and writes data. It is a tool that helps in resolving the issue of memory leaks. It uses reference counting in the default implementation of Python and CPython. Its main objective is to ensure the memory’s efficiency by checking that as soon as all the references to an object are expired, the referenced object is released too.

Causes of Memory Leaks in Python

CPython is a built-in detector in Python that ensures that the self-referencing objects and unused data are finally garbage collected.

In principle, this means that there is no need for the programmers to take care of the program’s allocation and deallocation of the memory. The CPython runtime will automatically take care of it by informing the garbage collector to remove the memory’s unused data.

However, this does not happen. Eventually, programs do run out of memory because of the held references. Sporadically, the garbage collector fails to monitor unreferenced objects. It is how memory leaks occur in Python. Slowly, the program fills up with memory leaks and runs out of memory. Detecting where the programs are leaking or using memory becomes a big challenge for programmers.

In short, memory leaks occur when unused objects get heaped up, and the programmer forgets to remove them. To detect and fix these problems, the programmers need to perform some Memory Profiling. It is the process through which the memory used by each piece of code is measured.

How to Find Memory Leaks in Python

Primarily we can debug the memory usage by the GC built-in module. The GC built-in module provides a list of all the objects presently known by the garbage collector. Even though this is a blunt tool, it quickly gives an idea of where the program’s memory is being used. Then the objects can be filtered according to their use. It helps us identify the unused objects that are referenced and hence can be deleted by the programmer. Thus, preventing memory leaks in Python.

The debugger will provide information about how many objects were created during the execution process. The only problem with GC is that it does not provide any information about how the objects are being allocated. The more important thing here is to detect the code responsible for this error rather than several objects created. So, finally, this would be of no use in identifying the code causing memory leaks.

Tracemalloc is a new built-in module introduced by Python 3.4. It is considered the most suitable for solving memory leaks and is extremely useful. It provides very detailed and block-level traces of the memory allocation. Apart from that it gives the connection of an object directly with the place where it was first allocated. It proves to be very useful. It is because it makes it easier for us to identify the code, which is the cause of memory consumption.

The first step is to trace the memory usage of the entire program. It helps in identifying the objects that are using the most memory. Tracemalloc also provides an insight into the parts of the program which need attention.

It then takes a snapshot of the memory currently allocated in the Python heap using tracemalloc.take_snapshot(). It saves information about the allocation memory, the source of the memory allocation, and their sizes. Tracemalloc helps in identifying which lines of code are allocated with which block of memory. We can calculate the statistics on memory use, differentiate the snapshots, and save them for analysis later.

This technique does not give adequate knowledge about which block of memory is used and where it is used.

While looking for a memory leak, we need to understand how the program’s memory usage is modified over time. To see the amount of memory allocated in each iteration, we can instrument the component’s main loop. When slowly small allocations start adding up, memory leaks become more apparent.

After this, only the snapshots having memory allocation related to the requests package can be kept. Finally, memory allocations can be tracked down by determining the uses of requests which are leaking memory. The full traceback helps in tracing backward from a memory allocation to its source. After identifying the errors in the code, the memory leaks can be fixed quickly.

Python is one of the most efficient and best programming languages in the world. It is an easy language designed for the readability of the mind. Many big projects like Google and Youtube have their code written in this language. Like other languages, memory leaks often occur in Python. Its built-in detector, CPython, helps in memory management. However, memory leaks still occur sometimes due to some unresolved issues.

It is a challenge for us programmers to solve this issue. By keeping track of the object’s memory usage and using the memory management model, the programs’ memory footprint can be reduced significantly. Python’s efficient memory tracking tool, tracemalloc, can quickly detect and fix memory leaks. Hence, being aware of the methods mentioned above can help us, programmers, resolve memory leaks quickly.