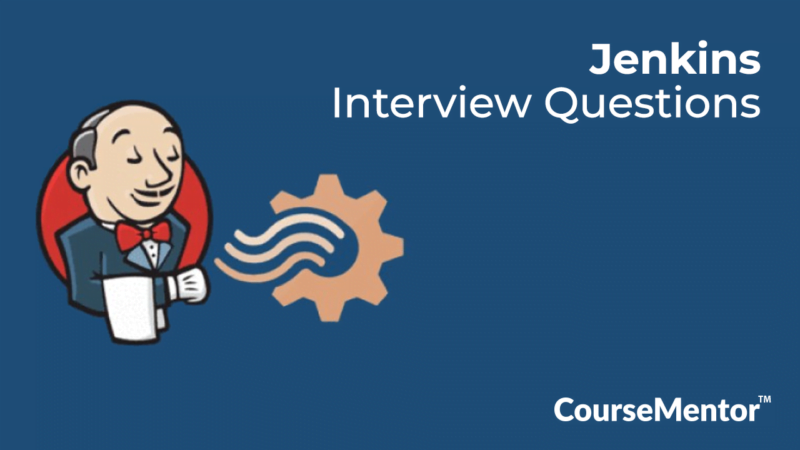 Jenkins is a continuous integration tool written in Java. With Jenkins, the developers can integrate changes into the project. If preparing for a DevOps role, there’s a good chance that the interviewer will ask questions about Jenkins. Below are the most frequently asked Jenkins interview questions that a beginner must be aware of.

Jenkins is an open-source automation tool written in Java. It is mainly built for Continuous Integration purposes. Jenkins allows the developer to build and test the software projects continuously. It makes it a lot easier for them to integrate changes into the project. It further paves the way for a new and fresh build. Jenkins is also possible to integrates a large number of testing and deployment technologies.

What is meant by continuous integration?

Integration is important when multiple developers are working on different segments. This different work but about the same web application needs to be integrated. One can see this in almost every aspect of software development. Continuous integration involves an automated process for each piece of code. It is performed daily. It further ensures that all the code gets tested.

What are the pre-requisites of Jenkins?

To use Jenkins, one requires the following –

What are the system requirements to install Jenkins?

The most basic and minimum requirement includes Java, a web browser, about 1 GB of drive space. 256 MB RAM is also one of the key requirements.

What makes Jenkins widely used across the globe?

The main reasons for this are –

It allows the developer to create three different role types, which are as follows –

How to start Jenkins manually?

The first step is to open the command line prompt. Then, go to the installation directory. It is the ‘Jenkins.exe start’ command that helps in starting the Jenkins.

Name some important plugins in Jenkins.

Some critical plugins are:

Jenkins supports a lot of SCM tools. Some of them are SVN, Clearcase, CVS, Git, AccuRev, Perforce, RTC, Mercurial.

How can one create a job?

The process is quite simple. The first step is to select the option called “new job”. This option is present on the dashboard page itself. Clicking this option will create a new job. After this, the developer can choose several options. Some of them are – SCM, triggers to control, notifications, etc.

What is the process of Jenkins?

Jenkins makes use of plugins to automate the process of continuous deployment and delivery. The entire process is as follows:

What is the main use of Jenkins?

How to add a user in Jenkins?

Firstly, go to ‘manage Jenkins’ and then click on the ‘create user’ option. Now, enter the required details.

What are the three main steps included in a Jenkins pipeline?

The three major steps involved are – building, testing, and deploying.

What was Jenkins originally called?

Jenkins was initially called by the name ‘Hudson’.

How do you define ‘pipeline’?

The pipeline is the process from a project’s earliest development stages to its release to the public.

How can one schedule a build?

There are two main ways of doing this. The first is to manually request the builds. The second is to commit to the management of the source code. The developer can choose either of the two ways to proceed.

How to move a file from one server to the other?

The simplest method of this is to copy the job directory and paste it into the other server.

What is an agent?

An agent is a point of reference. It mainly specifies a point in the pipeline in which Jenkins will be launched.

What is a ‘jenkinsfile’?

It refers to that file that contains all the information about the project’s pipeline.

What are the types of pipelines in Jenkins?

There are mainly three types of pipelines that one can find in Jenkins. They are–

These are the most frequently asked Jenkins interview questions, especially to beginners. The concepts mentioned in the above questions, when studied in depth, make it easier to get into the corporate world.