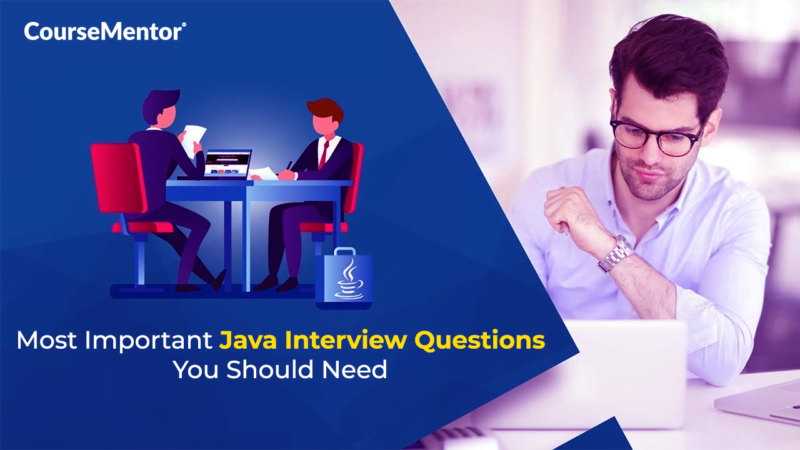 Java Interview questions is the most searched term over the internet from past few years. Today we are living in a society, where technology is getting over us in a very rapid manner. Everything we see around us works on the principle of the Internet and machines are building an ability to understand each moment of human beings, to give the most efficient feedback and more of a useful one.

Programming languages are the base of all the applications, and there is a limitless number of applications to look for. We have applications from a How-to tutorial, to research the theory of black holes.

Java is one of the most powerful yet easy general programming languages, which is used in technological appliances like, mobile phones, television, computers, automobile, and vice versa. The main function of java is to build an application that has the capabilities to handle huge data, embedded systems, processing power.

As we mentioned earlier, Java is one of the most powerful yet easy programs, the reason behind it is that it has been programmed to run on many other different types of devices and computers. Java can work well with computers that are running on Macintosh, Linux, Windows, Unix, and mobiles too.

So many of the students are pursuing a Java program that they get ample opportunity to work in the technology industry and get paid well. Let’s have a look at the most frequent asked Java interview questions

Tell me about yourself and why you want this position?

It is one of the most basic expected Java interview questions that every student is prepared for rather it is an interview no matter what field you are applying for, this question must be the first. The main reason is to get your vision for the job clearly to the interviewer. So, answering this can be your reason but make sure that the reason should make sense and wouldn’t be something useless.

Why Java is known as the platform-independent programming language?

One of the frequently asked Java interview questions. Java is a very simple and vast programming language to use, and the execution of the program does not depend on operating systems like Linux, Windows, Macintosh, and Unix. For C and C++, every machine needs its compile code whereas in Java one single compile code can be used in many other systems. Java is based on two languages (Javac)Compiler and (JVM)Interpreter.

You will always find this question is each sample of Java interview questions. The answer to this question is Jit is an abbreviation for Just In Time Compiler. It increases the efficiency of the interpreter by compiling the bytecode in the runtime. Jit compiles code to machine level directly for higher speeds of code execution. So basically, just in time compilation is a feature added to the interpreter of Java, so this involves the conversion of the code directly to the machine level during the compilation stage. This improvises the speed of execution of a Java program.

What is a ClassLoader?

Will the program run if I write static public void main?

Yes, because Java does not follow any specific rule for the order of specifiers you place in your program, so when the execution of the program is done with such a pattern in your specifiers then the program will compile successfully also it will run successfully. so it is possible to run a program while writing static public void main. It is also one of the major Java interview questions.

Tell me the difference between ArrayList and HashSet in Java?

This is the most frequently asked Java interview questions to all the Java programmers from Freshers to the most advanced level one. ArrayList carry-outs List interface and on the other hand, HashSet depicts Set interface in Java. ArrayList maintains the insertion of elements collected in an orderly manner while the HashSet does not maintain any of the order and does not even collect any order. HashSet is a complete object-based method while ArrayList can retrieve or remove the object by calling Get(index) and Remove(index) respectively. There can be many backup duplicates for ArrayList but there is none for the HashSet.

What is the default value stored in Local Variables?

What is a marker Interface?

It is one of the major Java interview questions. So basically, a marker Interface is just another interface, but normally in the interface, we provide some signatures, so these signatures belong to methods. In the normal interface, we just have method signatures but not the complete implementation, or at least we will be having some variables, but in a marker interface we do not have any kind of data manipulating method signatures, any data members nothing, they have special functionality, unlike a normal interface. So, an empty interface in Java is referred to as a marker Interface.