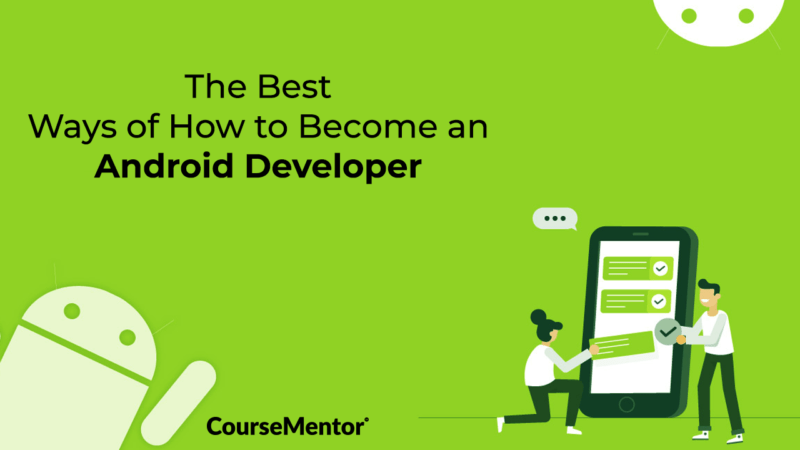 Today we live in a society, where all the functions of our household can be done with just a click of a button on our mobile phones. The applications that we use on our smartphones make our work much easier and faster. Therefore most of the students are searching for how to become an android developer.

Android has introduced tons of applications from sending money i.e. Gpay, Phone pay, Paytm, and what not to make a video call with the help of apps like Google Duo, IMO, Skype, and much more.

Android is a platform that has got every app for every aspect like Banking, Investment, Messenger, Games, Course learning apps, Fitness, Business, Social media apps, and a lot more.

There is infinite reason to become an android developer in the IT sector, as they are much in demand nowadays for building some unique and useful applications that benefit the individual needs and wants. Choosing an Android developer as a career is a very good decision as one has got ample position to choose from the creative department to the hard skill which is required to build software.

A mobile phone is used day by day or we can say it the most essential thing in our life which we cannot live without. Starting from the morning we start our day by looking at the notifications, what’s happening around the world, going through our emails from our workplace, students using it for their online classes and lectures. The mobile phone has become a need in today’s time, the mobile phone has its own benefits as well as drawbacks. Let’s learn how to become an android developer.

Why to be an Android developer

There are many reasons to be an Android developer, nearly 75% of the world population uses Android devices for their daily use. Android gives us millions of applications that are free of cost compared to the IOS which works with Apple and has a restricted amount of applications in which half of them are paid.

If we see the 75% population using android devices that means one in every 7 people uses android devices that’s how big the world of Android is. Android platform is open-source, which is responsible for making the developer ecosystem more energetic and advanced.

All the applications can be downloaded by the Google Play store which is mainly free of cost. Android doesn’t only restrict to mobile phones, it is also used in many Tablets, Television, Automobile, and much more. Television also uses an Android system to run the smart TV, we can now browse anything on television too just like on the mobile phone.

With the help of Android, we can learn many new languages, take up new online training on how to be an Android developer?, we can also hear new songs, videos and play exciting games like PUBG, Candy Crush, Subway Surfer, Temple Run, and much more. Kids have started to learn a lot more with android because it is very easy to use and nimble.

What are the skills required for how to become an Android Developer?

The most essential skill required for an Android Developer is to have a piece of core knowledge about the Java programming language. Many of the Android applications are based on the platform Java. One should be familiar with all the concepts of Java which are Variables, Loops, control structure, and Lists. It is the most important element of how to become an android developer.

Today Android has reached a level where it controls 90% of the applications that we use in our mobile phones, the reason for developing applications at such high numbers is because of the Java program, it is considered to be one of the most popular platforms to learn and develop an application and also it is the best programming language so far. Most of the developers use Java as their first preference.

XML is a language that extinguishes the set of rules by encoding documents in a way that is easy, explainable, and understandable to both machines as well as its maker i.e. Humans. It is a platform through which the information can be shared between the devices. It is the most important element of how to become an android developer.

The developers use the language of XML to produce a layout that helps to identify the User Interface which is to be used in Android applications. The functioning of the XML makes writing Java code in the layout function in the application though it is already running. This skill is considered to be one of the most important when it comes to Android developers. The main feature that XML gives is that it helps in parsing the data directly from the internet.

Google uses voice commands, image recognition, and also some extensions like chrome, Gmail, and much more. These are some handy features for an android system device which will be like all the other android devices. The guideline used must include tips that should be present on the screen.

Android SDK consists of some of the most important elements that help to develop, test, and debug an Android application, the important elements are as follows, Handy coding tools, software libraries, sample code, and a lot more. An Android SDK mainly consists of Java code modules which help the developer to approach the functioning of mobile phone devices like, speakers, accelerometers, and cameras.

Android mobile phones are so handy and simple to access, the reason behind this outstanding technology is the Android developers and the creative mind behind it. Many of the new generations want to undergo deep research more about the working of the application like How, What, Why, When, and Where. The Android system has made our life look so serene and quick. This blog consists of information regarding what, why, and how to become an Android developer, and possibly help to bring out some new faces in the world of Android development.